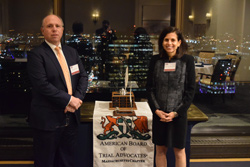 MassABOTA’s Annual Dinner was held on January 30, 2018 at the Boston College Club in Boston. President of the Massachusetts Chapter, Russell Pollock, made initial remarks that included a recap of the events of the past year. Included among his remarks was the impressive turnout for the Law Day reception on May 16, 2017 whereby the Honorable Dennis Curran was awarded the William Whiting Judicial Courage Award for his tireless efforts to bring attorney-conducted voir dire to Massachusetts Superior Courts among his other notable accomplishments. Attorney Pollock also made note of the success of the James Otis Lecture Series, which took place on September 25, 2017 at the Edward M. Kennedy Institute in Boston, Massachusetts. At the Constitution Day Dinner that followed the James Otis Lecture, Walter Prince was awarded the Robert Morris Trial Lawyer Award. 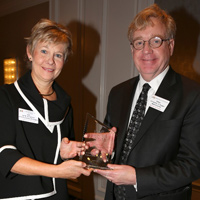 In January 2018, at ABOTA’s national board meeting that took place in San Francisco, Attorney Duggan was awarded the Inaugural ABOTA Foundation Civics Education Award for his work in founding the James Otis Lecture in 2008 and for expanding this program across the country while supporting an extremely successful Massachusetts program each year. 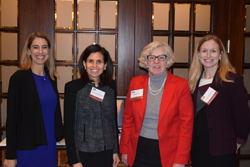 Attorney Pollock concluded his remarks with a vote on the incoming officers – Michelle Schaffer, President; Susan Bourque, Vice-President; Barbara Buell, Treasurer; and Marianne Leblanc, Secretary. The new officers were voted in and Attorney Pollock introduced Attorney Schaffer as the President of the Massachusetts Chapter of ABOTA. 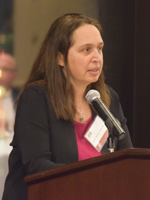 Attorney Schaffer provided remarks, which included optimism for 2018 regarding attracting individuals of more diverse backgrounds to become MassABOTA members. Attorney Schaffer also made note that the all-women executive board of MassABOTA was a first for Massachusetts and likely a first for any national chapter. Attorney Schaffer then introduced the night’s keynote speaker, the Honorable Indira Talwani, United State District Judge for the District of Massachusetts. Judge Talwani was nominated by President Barack Obama in 2013 and was confirmed by unanimous vote in the Senate on May 8, 2014. Judge Talwani described her background and her path to becoming a United State District Judge. She also provided her comments on the current judicial system and her thoughts on the future of the American judicial system. 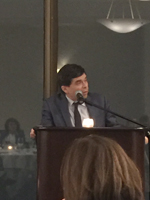 On February 7, 2017, we held our Annual Chapter Dinner Meeting at the Boston College Club. MassABOTA is proud to announce its new slate of officers who were voted in at the meeting: President – Russell X. Pollock; Vice President – Michelle I. Schaffer; Treasurer – Barbara Hayes Buell; and Secretary – Susan M. Bourque. We were pleased and honored to have Michael Rezendes, Veteran Investigative Reporter from the Boston Globe Spotlight Team, as our featured speaker.